Seven and a Half Things I Did While in Costa Rica

Yep, the whole reason I went to Costa Rica. My first month I worked at a school assisting (although I’m not sure how much help I was) a teacher in a kindergarten class. LOVED It. The kids were constantly teaching me new Spanish words and I was always testing their patience. The teacher would step out the room, something would happen in the playhouse area, little kids would be running to me, arms flailing, fingers pointing, Spanish flying out of their little mouths trying to tell me who did what to who. I would stare at them in confused interest, ask them to repeat it (this time slower, “Despacio, no intiendo mi amor!”) and they would all be shouting at the same time. It was a completely helpless situation. After they figured out explaining was of no use, it was time for charades, with the accusers acting out the actions of those poor little souls being accused, to which I would hear shouts of “No!! Yo no fui!”. Sometimes, even after I understood what they were trying to tell me I would allow this to go on until they were just fed up with the North American from the Estados Unidos with the horrible Spanish and went back to their activities. (Sigh) Good times. 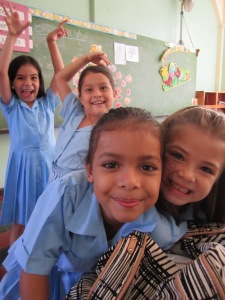 A few of the girls that kept me entertained

Now when I say I walked I mean I really walked. I walked like I have never walked in my life before. The town I lived in, Atenas, is in the mountains. The walk home (which I made twice a day most days) was an absolute beast. It was a free workout…everyday. But walking up, down and around Atenas has got to be one of the most peaceful, fulfilling things I did. I would see the same people sitting on their porches, grooming their plants and gardens, the same dogs roaming the streets (I think all dogs in Costa Rica roam the streets by the way), the same construction guys working on the same house, I would eavesdrop in on passing conversations trying to see if I could understand. Occasionally I would forget the time and forget that it was rainy season and get caught in a beautiful warm downpour and as people would be pulling out umbrellas I would slow down just a little bit, savoring every wet step, reminding myself that I was walking in the rain….(drum roll please)… in Costa Rica! I would walk up the long hill to my host family’s home, knowing my host mom would be laughing at me when she saw how wet I was, asking me where my umbrella was and why I didn’t take a taxi and I would smile, shrug my shoulders and say “no se”. If she spoke English I would have told her “Because walking in the rain here is like…dancing to music only you can hear, but not caring that no one else can hear it and enjoying it that much more”

A little portion of my beautiful walk home

3) I Let My Tongue Indulge in Spanish

I took Spanish classes while in Costa Rica. My whole six weeks in Costa Rica was like one big Spanish class actually. Everyday I learned new words, new phrases and I spoke (sometimes horrible and sometimes okay) Spanish. It was beautiful. I learned Spanish everywhere and strangely I have some favorites. I’ll share my ultimate favorite word: “upe!” I loved this word so much I bought a shirt that has it in big yellow letters. The first time I heard it I was sitting at my host family’s home eating lunch with my host brother and another volunteer and this lady comes to the door and yells “Upe!” I look at my host brother and say “Quien es Upe?” (who is Upe?) because the last time I had checked there was no one there by that name…. he laughs at me so hard he almost spits his food out and I can’t help but laugh with him. Turns out that “Upe” is like saying “knock knock”. Its used para averigar si hay un persona en una casa o otro lugar privado. Then I laughed again, realizing why my host brother had found my question so hilarious. Everytime I think of the word I laugh at myself and since I have been back in the states I have been looking for any excuse to use it…no luck. But at any rate the thought of most words or phrases bring a story to mind, a person, a place and thus Costa Rica will forever be remembered in almost every other Spanish word that rolls off my tongue and my experiences live on in a foreign language. 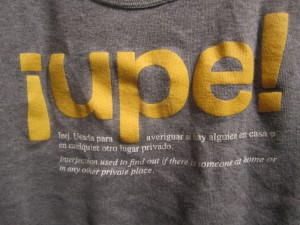 I brought books because I felt like that’s what everyone does when they travel. I originally thought I would spend a few hours a day in the park in the center of Atenas (which is absolutely beautiful) reading my life away. I probably spent a total of four hours actually reading there during my stay. I love reading, but living was just so much better. I realize now that when I am in the states reading takes me away, I get lost in it and its beautiful, but in Costa Rica I didn’t have the inkling of a desire to get lost in any books. I only wanted to get lost in Costa Rica, in time and in the beauty of it all. Unfortunately, me forcing myself to read was not one of the most enjoyable things I did, but I did find beauty in the things that distracted me while I was reading, like ants walking across my book pages, leaves falling in my hair, my camera (see picture below), people passing by that all of sudden became much more interesting when I had a book in my hands…the list goes on…

My view while "reading" in the park 🙂

Of course I traveled to Costa Rica, but I also traveled around once I was there (on the weekends). I went to Manuel Antonio where I experienced my first Costa Rican beach, Monteverde where I ziplined through the cloud forest, Arenal where the presence of a volcanoe, strong, deadly and powerful, allowed me to feel every ounce of peace in my body in duality with every ounce of strength. And  ( I saved the best for last) my last week in Costa Rica, I stayed in the jungle town of Puerto Viejo on the Caribbean coast. This is where I truly fell in love with Costa Rica (as if I didn’t hand my heart away the moment I stepped off the plane). The fusion of Afro-Caribbean west Indies and Costa Rican language and culture was one of the most…uplifting, inspiring, utterly beautiful on every level things I have experienced. The language there (which is different from the Spanish inland) was like a sweet melody that tickled my ears, the food was…magical, I wanted to drown in the culture and be revived through the music. Everyday was a new adventure, whether biking six miles to the beach in Manzanillo or trying to see just how long I could walk along the coast…even the air was enchanting. I concluded I was meant to live in Puerto Viejo and I will, for at least one year of my life unless there is some divine intervention that keeps me from it.

Eating in Puerto Viejo aka the best place on earth

6) I Felt and Used all Five Senses

I knew I had five senses, we learned that in like first grade right? But in Costa Rica I felt all of them all the time. Call me lame. I smelled air, ocean, jungle, smog, rain, something absolutely repulsive managed to smack me in the face every now and then, sometimes smells more beautiful than the concept of home itself danced their way into my memory. I saw love, humanity, peace, people, colors…my eyes were like sponges. I heard music, chickens and dogs in the mornings, the geckos in my room at night, Spanish everywhere, the ocean in Puerto Viejo. I tasted heaven (or a really good knockoff of it) and lots of fruit… some sweet and some odd. I touched…lots of things that would sound strange out of another 500 words of context.

Ever prayed to God from another country? The first night I prayed I was wondering if God could hear me from Costa Rica, I felt like it was a long distance call or something. Silly me. After I was sure God was still on the other line praying in Costa Rica was simply pure and beautiful. I even tried it in Spanish a few times. I went to my host families church and heard the Word in Spanish. The feeling was one of those things you just can’t explain, but I can confidently assure you that God is in Costa Rica too.

A half) I kinda cried

I absolutely did NOT want to leave Costa Rica. I held strong in the taxi ride leaving my host families home, waving out the back window until they were out of sight (like something out of  a movie). I was fine going through airport security and getting on the airplane. But once the airplane started moving down the takeoff strip and I was really leaving Costa Rica and there was NO going back, my tears could not be held any longer and I let them fall. Slightly embarrassed but so hurt I didn’t really care who noticed. When I got back home to the states and a little settled in I wrote a message to Costa Rica on my dry erase board. It’s still there and without brutal force I do not think it’s coming off. It reads:

“I miss it, late mornings and even later nights. Food that filled my soul and music that lifted it. I miss being feet away from a never-ending ocean with a magical horizon that melted into the heavens. I miss having nights with a billion stars suspended over my head. I miss the freedom, the outright ability to lose control and let life and God guide you. Costa Rica, I miss you and I think I just might be in LOVE” 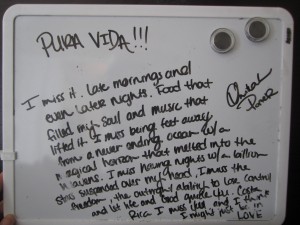 My note to Costa Rica

I could not close this without a HUGE thanks to those that helped make this volunteering adventure possible, thus big Thanks to Pastor Mark and Mia Whitlock of Christ Our Redeemer A.M.E., the lovely D. Hensling and all my friends who continue to put up with my ranting and raving about how much I just want to be back in Costa Rica. Pura Vida!